Why We Need Research: Frankie the Fighter’s FIP Story 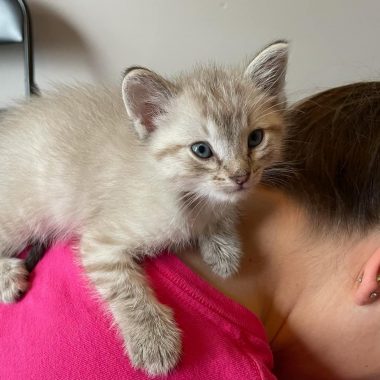 Frankie Aloysius came to us from a local rescue when he was just a kitten. His favorite things included food (dog food!), kneading/making biscuits (aka making us tortillas), playing with ice and picking on his human and fur siblings.

In early June of 2022, we noticed Frankie wasn’t showing any interest in his favorite things. We spent the next several long, stressful, expensive days seeing different veterinarians and running various tests as Frankie declined rapidly. Finally, we got the worst news: confirmed, dreaded diagnosis- FIP (wet). Frankie was 14 months old.

He had no interest in food, so we had been hand feeding him (basically forcing food down his throat), giving subcutaneous fluids several times a day, plus giving antibiotics and an appetite enhancer. On June 10th, we rushed Frankie to the vet because his gums had turned grey. The vet took me aside and said “I want to be real with you, I am not sure if he will be coming home”. I came home and had one of the toughest conversations ever with my daughter.

During this awful time, we had been doing extensive research on the disease and we had discovered there might be a treatment that could save our sweet baby Frankie, but it wasn’t available from the vet. My daughter immediately wanted to try this expensive “Mafia Drug” and she began writing Frankie’s GoFundMe story. Within hours we had raised enough money to order the medication and pick it up locally. Frankie got his first injection on June 10th, 2022 at 11:00 pm.

By 6 am the next morning, Frankie began showing interest in eating food (dog food of course!) A couple days after that, he was jumping on furniture and wanting to be near his humans. It had been almost two weeks since he had done any of this.

On September 2nd, 2022, after 84 days of treatment, he was cleared to enter “observation”. 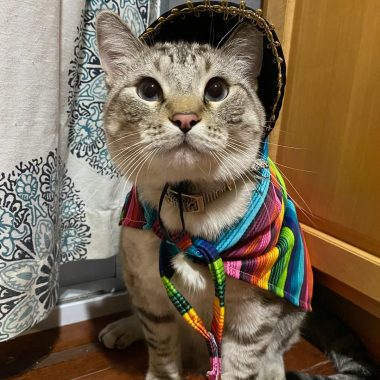 When Frankie first got sick he was about 16.50lbs and during the treatment process his lowest weight was down to about 15.50lbs. Today, Frankie is 18lbs, and obviously, his love for food is back. Frankie has gotten back to the things he loves and has discovered new loves such as anything that rattles like paper and chasing bugs. He is doing fantastic!

We are very fortunate to have been blessed by so many giving people who helped Frankie’s fight. We have met some people who honestly deserve the title of Superhero or Sainthood. We could not financially afford these treatments without the help we received through GoFundMe. I make and sell enchiladas to help pay off his “mafia drugs” and medical expenses.

Having a kitty diagnosed with FIP used to be devastating, and always fatal, but now there is hope due to the wonderful people who are funding the research, doing the research studies, and continuing to fight for the ones without a voice.

Without these superheroes we would have lost our precious Frankie.

Kyle Rodriguez and her daughter are pet lovers from the Midwest US. They are active fundraisers and support both animal and human causes in their area.