Thirteen years ago on November 18th, Dr. Susan Little DVM, then President of the Winn Feline Foundation announced creation of the Bria Fund for FIP Research, dedicated to the study of Feline Infectious Peritonitis. 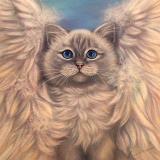 Bria, a nine month old Birman kitten died from complications of FIP on April 19, 2005. In her memory, Bria’s parents, Susan Gingrich and Jim Shurskis, successfully approached Winn with their proposal for the Bria Fund. The original Winn announcement stated, “In memory of Bria, the fund will advance FIP research to hopefully someday eliminate it, or at the very least, develop an accurate test and make FIP a treatable, chronic illness.”

Because of the Bria Fund’s creation, interest in FIP research increased, and donations of over a half million dollars from supporters funded 26 important studies from FIP researchers around the world. FIP progress occurred beyond part of Winn’s vision in 2005. Some cats are now living with FIP as a chronic disease. Beyond that, two clinical trials, using anti-viral drugs resulted in cats seemingly cured of FIP, some of them for over two years and living normal, healthy lives. Although not approved, nor on the market yet, these drugs and others currently being researched will be a game changer for many cats with FIP.

On the 10th anniversary of the Bria Fund, United States Congressman Jimmy Duncan from Tennessee issued a statement entered into the Congressional Record acknowledging the Bria Fund, FIP, progress made, and the importance of FIP research. November 18th is acknowledged as “National Feline Infectious Peritonitis (FIP) Awareness, Research, and Education Day.”

About Winn Feline Foundation
The Winn Feline Foundation is a non-profit organization established in 1968 by the Cat Fanciers Assoc. that supports studies of medical problems affecting all cats. Projects funded by Winn have provided information used every day in all aspects of feline medicine. For more information, visit www.winnfelinefoundation.org