How a Kitten Named Bria Changed the World 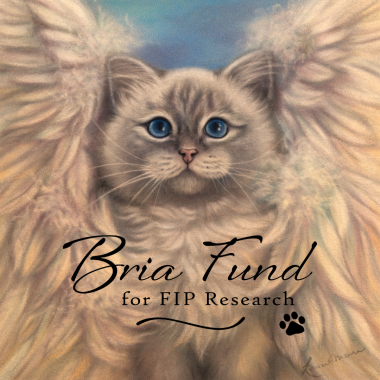 Today marks the 17th anniversary of the creation of EveryCat Health Foundations’ Bria Fund for FIP Research, named in honor of Bria, a nine-month-old Birman kitten, who died from complications of FIP on April 19, 2005.

Feline infectious peritonitis, or FIP, is caused by a virus mutating from a common, typically harmless, feline coronavirus. FIP causes severe systemic disease, and ultimately death. The syndrome was first described in 1963, and it wasn’t until the late 70’s that it was identified as viral, specifically related to feline coronavirus. There was no uniformity in symptoms in suspected FIP and no definitive test for it. The prognosis was grave, and the recommendation for suspected FIP was usually immediate euthanasia. That was the FIP status when Susan Gingrich and her husband Jim brought home Brieanna Jamie, a beautiful lynx blue point Birman kitten, just before Thanksgiving in 2004.

They called her Bria for short, and she was an energetic, healthy kitten. Bria had her favorite ball, which she chased across the kitchen floor and down the steps. Then, she would retrieve it in her teeth and return it to be thrown again. Bria also sat by the kitchen table when the family ate dinner and would beg for food. Bria also had a sweet tooth; whipped cream and jelly were her favorites.

Around 6 months of age, Bria began exhibiting some symptoms, and after ruling out other potential diagnosis, based on pleural fluid and other symptoms, Bria’s vet suspected FIP. Despite multiple specialists and Susan doing everything she possibly could to save her, the outcome was inevitable. Bria died at just 9 months of age, leaving Susan and Jim heartbroken, angry, and frustrated.

Susan Gingrich exemplifies the term activist. Instead of saying, “somebody should do something about that”, Susan said, “Bria, your short, little life and courage will not be forgotten, and I’m going to do something about FIP!” So, shortly after Bria died, and after learning what she could about FIP, Susan approached the only organization in the world whose primary mission was to fund feline specific health research, the Winn Feline Foundation, now called EveryCat Health Foundation, and proposed the “Bria Fund for FIP Research”.

On November 18th, 2005, Dr. Susan Little, DVM, President of the then Winn Feline Foundation, announced the creation of the fund, dedicated to funding studies specific to Feline Infectious Peritonitis, with an initial monetary contribution from Newt Gingrich’s Center for Health Transformation’s Foundation.

Because of the Bria Fund, interest in FIP research increased and progress has been made beyond all expectations in 2005. Treatments have been developed, and cats are now being “cured” and living normal, healthy lives. Although not approved, nor on the market yet, these drugs, and others currently being researched, are game changers for many cats with FIP.
The result of Susan’s “I’m going to do something about this” is the potential for not just treatment of FIP, but additional and affordable FIP cures.

To date, the Bria Fund for FIP Research has granted nearly $800,000 USD in FIP related projects at institutions worldwide, because of global donors, and thanks in no small part to the relentless determination of Susan Gingrich and an army of cat parents, rescuers, veterinary professionals, and researchers continuing the battle to defeat this devastating condition.
But we aren’t there yet. There is still so much to learn before we completely solve the FIP puzzle. Additional studies for better diagnostics, treatments, and cures, as well as expanded FIP education, are needed to ensure that no more cats and kittens die needlessly.

On the 10th anniversary of the Bria Fund, United States Congressman Jimmy Duncan from Tennessee issued a statement entered into the Congressional Record acknowledging the Bria Fund, FIP, progress made, and the importance of FIP research. November 18th is acknowledged as “National Feline Infectious Peritonitis (FIP) Awareness, Research, and Education Day”.
Thanks to Susan Gingrich and the Bria Fund, we have something priceless: hope for a future without FIP!

A POEM OF HOPE
by Susan E Gingrich

We are extraordinary cat lovers, you and me,
A world without FIP, we dream to see.

Without FIP, we wouldn’t have become friends,
Neither would we know, that FIP will surely end.

In FIP research, to solve the mystery, we will fund,
Until our evil enemy FIP, is finally done.

Thank you, dear friend, for all you do.
And may God Bless your fur babies, your family, and you!

Change a cat’s life.  Make a gift to the Bria Fund for FIP Research