Mesenchymal stem cells as a novel treatment for feline asthma: evaluation of efficacy and mechanisms of immunomodulation


Asthma is a common inflammatory lower airway disease affecting up to 5% of the pet cat population. Asthma is characterized by abnormal inflammatory cells in the lungs (eosinophils), airway constriction causing difficulty breathing, and permanent structural changes that lead to a decline in lung function. There has been recent interest in the ability of intravenous stem cell therapy to treat inflammatory diseases. One such area of study is lung disease, including asthma. In this Winn-funded study, the investigators sought to study the effects of intravenous mesenchymal stem cells (MSC) on the clinical signs and alterations in airway resistance/constriction in an experimental model of feline asthma. 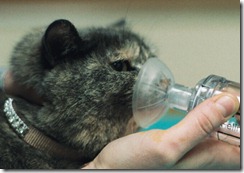 Nine cats with an established asthmatic state received 6 intravenous infusions of stem cells or a placebo infusion. To assess the effects of MSC infusion on decreasing airway inflammation, measurements were obtained at baseline, 3 days after the first infusion, and the final after all 6 infusions had been administered. Measurements were performed on a sample of fluid collected from the airways and the percentage of cells that were eosinophils determined. A visual analog scale (VAS) was used to evaluate the response to MSC on the clinical signs of asthma and a ventilator lung mechanics procedure performed to objectively measure the effects of MSC on airway resistance.

Improvements in the asthmatic state can be noted early or can be delayed several months after stem cell treatment. The initial data analysis has revealed that in the early stages after stem cell administration very few changes were noted compared with placebo treatment. Importantly, this does not mean MSCs failed to work; in fact, the investigators have data from an additional small pilot study that suggests that changes continue to become apparent months after stem cell infusion and these changes are marked in comparison with effects after early stem cell administration.

Because dramatic responses to stem cell therapy may occur months after administration, the investigators have applied for and received partial funding (recently funded MT 12-003) to continue evaluating the cats in this study for assessment of airway inflammation. With this newest funding and efforts to obtain additional funding, they can use advanced imaging techniques (CT scans), ventilator lung mechanics, and immunologic assays to help provide information regarding if and how stem cells could be an important and viable treatment option for pet cats suffering from this chronic lung disease. [VT]