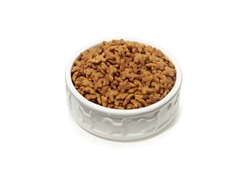 This study examined the feeding of a raw diet and its effects on kittens. The feeding trials have been completed using 24 kittens and two different raw food diets (homemade and commercial). The control diet was a commercially available kitten food. Weight gain over a 10-week period was at the high end of previously determined data for all kittens. Male kittens had higher weight gain than females, but all diets performed equally well. Blood protein and amino acid levels were in the normal range. Evidence of Salmonella infection was evident in some kittens fed the raw diet, but was not clinically significant.

Both raw diets met the claims for nutritional adequacy. White blood cell counts were slightly elevated in the kittens fed the homemade raw diet, likely a reflection of the higher microbial content. Innate immunity appeared to function at a higher level in the kittens fed a raw diet. One litter of 4 kittens experienced diarrhea. Overgrowth of Clostridium perfringens was later documented; this bacterium thrives in the gut on high protein diets. Two of the litters had diarrhea due to Anaerobiosprillium spp, a normal flora but capable of causing disease. Digestibility was highest for the raw diets, leading to less fecal matter. A final report will be available upon completion of the primary investigator’s dissertation. [MK]