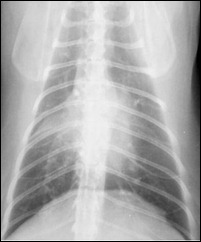 Pneumothorax, or free air in the pleural (thoracic) space, is usually the result of trauma but it can appear to be spontaneous. This study reviewed 35 cases of spontaneous pneumothorax (SP) in cats over a 10-year period. The objective was to identify causes, evaluate treatment options, and report the case outcomes. The majority of the cats were male with a median age of 8 years. The most common presenting complaint was acute onset of respiratory distress. In all the cases of cats with an established etiology, SP was associated with lung disease. The underlying associated diseases included inflammatory airway disease (most common), neoplasia, heartworm infection, pulmonary abscess, and lungworm infection. Many of the patients were managed successfully with only observation or needle thoracocentesis to remove air, and specific treatment for their primary lung disease. In contrast to dogs, surgery was associated with a poor outcome in 4 of 5 cats. [VT]