Parvovirus in cats and dogs 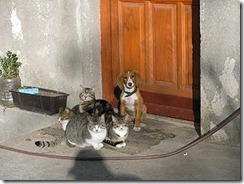 Canine parvovirus (CPV-2) emerged in the late 1970’s as a variant of feline panleukopenia virus (FPV). By the early 1980’s, this variant was replaced by new variants that infected both dogs and cats (CPV-2a and -2b). Interestingly, it is now believed that raccoons may have played a role in the evolution of FPV and its adaptation to dogs, and re-adaptation to cats. Through analysis of all of these viruses and variants, the researchers were able to describe the complex sequence of events, involving small changes in the virus were necessary for these changes in host adaptations. Furthermore, they found that these changes had to occur in concert with one another in order for the adaptation to be successful. These findings show how complex this adaptation to new hosts is, and thus why it is not a common occurrence among viruses. [MK]