Viral pathogens commonly infect domestic cats, in particular in multi-cat environments such as shelters and catteries, often leading to increased morbidity and mortality. A promising addition to our armamentarium against viral infection along with vaccinations is the manipulation of innate immunity. Oligonucleotides (ODN) containing unmethylated cytosine-phosphate-guanosine motifs of class A (CpG-A) are recognized as pathogen-associated molecular patterns due to high abundance in viral genome (as well as bacterial genome) and, thus, are highly potent synthetic inducers of innate antiviral mechanisms. 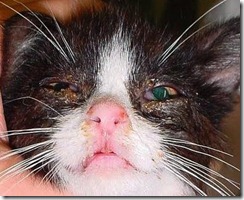 This study tested in vitro CpG-A ODN ability to enhance innate immune responses and prevent viral replication. CpG-A ODN was shown to stimulate feline peripheral blood mononuclear cells (PBMCs), enhancing their proliferation, and shifting their gene expression in an antiviral orientation. In vivo, CpG-A ODN also induced a systemic antiviral state with astonishing effects of potent induction of IFNα and IFNω, with mRNA expression of these genes increased by up to 12 000 and 35 000-fold respectively in PBMCs of cats.

With regard to this, a recombinant feline type I IFN marketed in both Japan (Intercat®) and Europe (Virbagen Omega®) has made its way into therapeutic protocols for FCV, FHV, FeLV and canine parvovirus infections and has demonstrated preventive capacities in a cattery developing an outbreak of FPV. However, when compared to direct initiation of antiviral mechanisms by a recombinant IFNα protein, administration of CpG-A ODN holds the advantage of inducing the production of all type I IFN and their subtypes, which have been shown to possess differential antiviral properties and kinetics. On the other hand, CpG-A ODN stimulated PBMCs in kittens tended to develop an immunologic environment with a Th2 orientation (antibody response) corroborating the immature IFN system and impaired activation of mononuclear cells in neonates. This particular observation opens new perspectives on possible explanations for the qualitative discrepancy between innate immune responses in newborns and adults.

Overall, treatment with CpG-A ODN enhanced resistance against feline viruses from five distinct viral families, namely Coronavirdae, Herpesviridae, Caliciviridae, Parvoviridae, and Retrovridae. The data highlights the prophylactic potential of CpG-A ODN in domestic cats as a stand-alone agent and against a large range of viral pathogens simultaneously. Cats may highly benefit from such a molecule when placed in environments with strong infectious pressure such as catteries, shelters or pet shows. [GO]