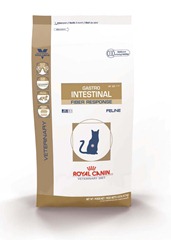 Constipation is a common clinical complaint in cats and can result from a number of different causes. Treatment includes determining and eliminating the cause, if possible, together with medical or, in some cases, surgical management. Medical therapy frequently involves the use of laxatives, enemas, and prokinetic agents such as cisapride. Psyllium is a soluble fibre that exudes a mucilaginous gel that increases fecal bulk. It also adds to stool bulk by additional, water-holding properties. Psyllium has been found to increase stool frequency and consistency in humans with idiopathic constipation. This study involved assessing the use of a highly digestible dry food formula, with added psyllium, in two field trials involving 66 cats with constipation. The main conclusions the authors made from both trials were that the test diet was palatable and well-tolerated, that clinical remission was noted in the majority of the study patients, and that other symptomatic therapy was either not needed in clinical management or could often be discontinued or reduced without recurrence of clinical signs. The authors also noted that both surgical management and euthanasia were being considered in a small number of cats, but were subsequently not required due to the success of dietary therapy. [VT]