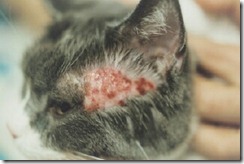 Cyclosporine A (CsA) is an immune-modulating drug that has traditionally been used for kidney transplantation in cats. In recent years, CsA has been reported to be effective in the management of several skin diseases, including allergic skin disease. CsA is typically given by mouth, but absorption of the drug is variable and not all owners can give oral medication to their cats long term. The objective of this study was to determine if subcutaneous administration of CsA would give predictable blood concentrations of the drug. If so, this route of drug administration could be easier for some cat owners, and may reduce side effects and reduce the need for blood monitoring of drug levels.

This study looked at the pharmacokinetic profile of CsA after intravenous (IV) and subcutaneous (SQ) administration. Five healthy adult cats were given a single IV bolus of CsA. After two weeks, they received a dose of CsA SQ every 48 hours for 14 days. Blood samples were taken and measured. No adverse effects were observed in any cat. The results indicated that SQ CsA bioavailability is very good. The SQ route could represent a promising route of administration in cats in the future. [VT]