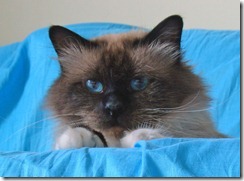 This research project examined the increased susceptibility of Birman cats to FIP. The investigators specifically focused on various blood parameters to correlate with immune status and FIP susceptibility. Blood and/or feces were initially collected from 233 cats in 25 breeding catteries or colonies; 57 cats were excluded due to insufficient data or presence of disease within the cattery. Of the 176 cats tested, 5 were diagnosed with FIP. Birman cats were not found to be feline coronavirus seropositive at a higher rate than other breeds. However, the percentage of cats with detectable virus in feces was higher in breeds other than the Birman. Populations of both Birman cats and cats of other breeds had a high prevalence of FCoV infection; there was no statistical difference between the two groups. While differences in some blood parameters were noted, all, both Birman and non-Birman, were within normal reference ranges. The researchers speculate that these differences are breed related, but do not seem to correlate with FCoV infection.

No differences of biologic significance were noted among the various lymphocyte populations in any group of cats, whether Birman or non-Birman. Individual variations in cytokine levels were noted, but did not correlate with FIP development. Birman cats seemed to have a higher capability for cell-mediated immunity, which is critical for protection against FIP. The researchers speculate that poor cell-mediated immunity could induce the persistence of the virus in the host and ultimately this could increase the probability of mutation of the virus and subsequent development of FIP. [MK]