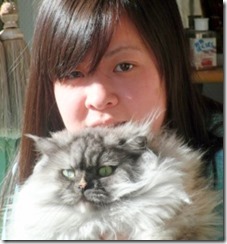 Yuki Nakayama has demonstrated a commitment to feline health research as a DVM candidate, as well as earlier in her academic career. While at Tufts, in an effort to assess the efficacy of vaccines in preventing upper respiratory tract disease, Yuki has been able to follow the immune response to vaccination in 99 shelter cats during.  Yuki took an active role in the clinical care and evaluation of these cats. She presented the results of her research during the symposium.

During her undergraduate studies at Wellesley College, Yuki volunteered with shelters and rescue organizations in her community, and interned at a wildlife sanctuary and rehabilitation facility for seven months. She determined to embark on a career in research and feline health studies.

After receiving her undergraduate degree, Yuki honed her research skills studying molecular biology research on human pituitary tumors. During the same period, she was appointed the facility director of a small feline rescue group. Yuki became deeply affected by the constant outbreaks of severe upper respiratory tract disease in shelter cats despite aggressive treatment. Yuki refined her career goals realizing she wanted to do research that would directly impact the lives of shelter cats.

While she grew up in a household of many pets, (The Nakayama Zoo), Yuki did not encounter cats until she began to volunteer at the humane society in her late teens. In her words, she has been “obsessed” with them ever since.