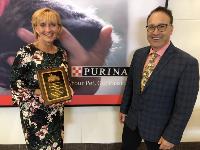 Barbara Fawver has edited the Purina ProPlan Cat Update newsletter for many years, and is the 2018 recipient of the Winn Feline Media Appreciation Award. “Barb’s been he’s been incredibly proactive about focusing content on the latest news in cat health,” says Winn Feline Board Member Steve Dale, who surprised Fawver with the award.

About Winn Feline Foundation
The Winn Feline Foundation is a non-profit organization established in 1968 by the Cat Fanciers Assoc. that supports studies of medical problems affecting all cats. Projects funded by Winn have provided information used every day in all aspects of feline medicine. For more information, visit www.winnfelinefoundation.org