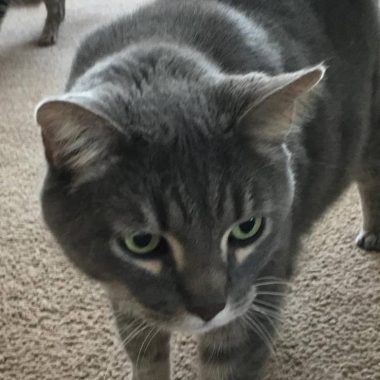 I found Augustus as an abandoned kitten outside my apartment complex and we bonded immediately.

For twelve years, Augustus dutifully followed me around the house, comforted me, wrapped his paws around my neck after meowing for me to pick him up, and always greeted me at the front door when I came home. Instinctively he knew when I was upset, rubbing up against me and purring.

Like Steve Dale’s Ricky, Augustus had special skills such as opening cabinets and drawers by standing up on his hind paws, grasping the top of the cabinet with his front paws and pulling.

Augustus was very healthy most of his life until he reached age 11 when he developed a urinary blockage and had to have surgery. During this time, the surgeon also diagnosed feline HCM (hypertrophic cardiomyopathy). He survived surgery and I fed him a prescription urinary cat food diet. 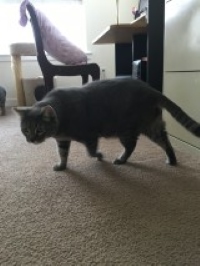 Just like so many others who have faced the sudden loss of a cat companion due to HCM, on June 4, 2016 I lost Augustus. One minute he was greeting me as usual and purring, a short time later I found him deceased on the living room floor.

My solace is that his tragic death was so sudden that he did not suffer. Augustus was at home, knowing he was loved.

Losing Augustus to such a devastating disease as HCM showed me that finding the answers to preventing or treating HCM was critical.

Having a grant related to HCM research that is named for Augustus is one way Augustus’ memory will be recognized as part of that critical search for answers.

To support hypertrophic cardiomyopathy research, make a gift to the Ricky Fund for HCM.